Penile curvature is a common problem, where the erect penis is bent to a side. When the bend is more than thirty degrees, it commonly prevents a normal sexual relationship and causes pain in the female partner, despite good erection. Surgery is necessary in such cases.

The penis may be bent or curved due to inborn congenital abnormalities or an acquired fibrotic disorder. Fibrosis is the deposition of inelastic tissues, usually to rebuild and bridge a gap at the site of injury.

Fibrous tissue in the penis leads to shortening, curvature and loss of erection in some cases, being inelastic and being deposited where blood should flow to fill up the penis (Peyronie's Disease).

Fibrosis may occur in the penis due to a disease named "Peyronie's disease" the cause of which is not known, but is commonly attributed to diabetes and rough sexual intercourse.

Fibrosis may also occur following prolonged untreated priapism, or due to repeated injection of the penis to induce erection in cases of impotence (intra corporal injection), irradiation for treatment of cancer, among other causes.

An alternative is elongation of the shorted side by inserting tissues into this aspect of the penis to widen it (grafting). Unfortunately, this causes impotence in many cases.

The author of this website; Dr.Shaeer invented a surgical technique that can correct some cases of curvature without shortening

This technique relies on a unique geometrical idea where rotation of the corpora cavernosa results in transferring the shorter curve to the inside of the penis, correcting the curve without shortening (refer to the illustration below).

Recently, the European Society of Sexual Medicine (ESSM) has incorporated Shaeer's Corporal Rotation into its curriculum for the European Fellowship in Sexual Medicine. Several international experts and opinion-setters have adopted this technique. This opinion has been expressed in the newsletter of the ESSM, among others.

On the other hand, in cases of extreme fibrosis of the penis, or when there is associated severe impotence, the only solution is insertion of a penile prosthesis. Unfortunately, insertion of a penile prosthesis in such conditions is very difficult and risky since the rigid fibrous tissue occupies the corpora cavernosa, where the prosthesis should be inserted. The corpora cavernosa are closed cylinders. Removal of fibrous tissue out of them is usually done by excavation in blind fashion ( being closed cylinders), unless a very long incision is performed spanning the whole length of the penis. Blind excavation results in  severe injuries. Long incisions result in infections. Again, the author of this website; Dr.Shaeer, has designed an innovative surgical technique where an endoscope is inserted into the corpora cavernosa, allowing easy excavation under vision. This technique is internationally published under the name of "Shaeer's Technique":

Another totally separate entity is "Penile drop", where the penis is straight but points downwards in the erect state. 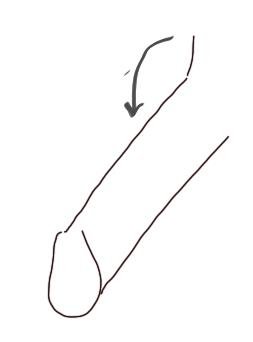 This is easily and totally correctable either by anchoring the base of the penis backwards to the anterior abdominal wall at a higher position. The Penis is normally attached to the pelvis by a ligament (the suspensory ligament), that determines its angle upwards or downwards. Laxity of this ligament whether inborn or due to trauma can be corrected by one or two sutures placed between the base of the penis and the anterior abdominal wall.

This is a 20-minute surgery and the individual is discharged from the hospital the same day and allowed to resume intercourse one week later.

Professor Shaeer is one of the very few experts who have published scientific manuscripts in this domain.

Penile torsion is a condition when the penis is rotated along its longitudinal axis such that its undersurface is facing sideways or even upwards. Torsion is either clock-wise or counter-clockwise. 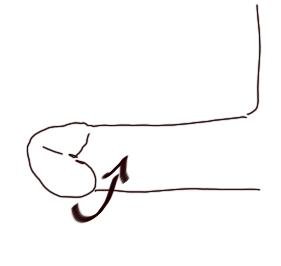 The condition can be congenital (inborn, life-long) without an apparent cause, or could be acquired due to surgical complications, fibrosis, Peyronie's disease or trauma.

Torsion of the penis will not affect sexual performance or fertility in any way. Its only down-side is cosmetic.

Surgical correction is possible if cosmetic complaints are pressing. Surgery lasts for around 20 minutes with the focus of restoring the normal shape of the erect penis primarily, and usually -but not necessarily- the flaccid penis as well.

Prof.Shaeer invented a surgical technique for this purpose. The external covering of the penis is composed of skin and an underlying sheet of muscle (the Dartos fascia). This Dartos fascia is dissected and sutured to the opposite side of the penis such that it rotates the penis towards the desired side.

Go to the research paper